Master Hong was born in Jin Hua, China, and started practicing Wushu with the Jin Hua Wushu Team when she was 8 years old. She was the top Wushu athlete and Taichi champion in Zhe Jiang province, China. Master Hong has a B.A. degree in physical education in Wushu and Taichi from Zhe Jiang Normal University in China. She became an assistant professor and team coach of Zhe Jiang University of Traditional Chinese Medicine in 1992. She coached the college Wushu and Taichi Team and competed in China national tournaments until she immigrated to Seattle, U.S. in 1994.

Master Hong was named U.S. "Athlete of the Year" by USAWKF in 1998, and competed on the US National Wushu Team in the 5th World Wushu championship in Hong Kong in 1999.

In 1996 Master Hong established the Chinese Wushu and Taichi Academy in Seattle and has fostered tens of thousands of students. She offers seminars and workshops to schools and corporations both nationally and internationally. Clients include Northwest Institute of Acupuncture and Oriental Medicine, Forest Ridge School, Bush School, Lakeside School, Pacific Crest School, Northwest School, Mercer Island Schools, University of Washington, Chihuly Garden, Bellevue Library, Wizards of the Coast, Microsoft, Amazon, Expedia, and many other organizations in the Seattle area. She has also conducted workshops and seminars both domestically in New York, Baltimore, Atlanta, Chicago, and internationally in Canada, South America, and China. Her students have won many champions and grand-champion honors, including the first World Taichi and Health conference in Hainan, China in 2001, the Can-Am Wushu Championships in Canada, and the International Wushu Championship. Her career has been featured in Kung Fu magazine, the Seattle P.I., and the Seattle Times. Master Hong and her students have also been featured in film and performance including "Postcards from Buster" on PBS, "China in Dance" (2000), "Dance This 2009", and a Shaw Brothers promotional film. Master Hong is the co-author of a book on Taichi in Chinese, not yet translated into English.

Master Hong's passion in Taichi originated from her late teenage years at University, especially after she studied Chinese Medicine for two years and visited Madam Chen Lixing in Xian, China. Master Hong's strong belief in Taichi's therapeutic value in life, and powerful martial application is a constant source of inspiration for her.

Currently, Master Hong is focused on self-practice and teaching Taichi. In addition, she practices Guzheng and Pipa (traditional Chinese musical instruments) since 2003, and enjoys traveling around world with family to experience worldwide different culture.

About performance of Master Instructor Hong and her students.

In the year 2000, Shifu Hong and her students made a brief appearance in the Sylvester Stallone film, Get Carter.

The famous Hong Kong film company, shot footage of Shifu Hong and her students for promotional use in Asia.

In 2004, Buster the bunny, best friend of PBS Kids show star Arthur, got his own series on PBS, Postcards from Buster. In one episode, Buster visits Seattle and learns Wushu and Taichi from Shifu Hong and her students.

I was originally drawn to CWTA after learning about Master Instructor Yijiao Hong: her thorough training since childhood in China, her subsequent career as a Wushu instructor in China and — since the 1990s — in Seattle, and the international recognition accorded her. This gave me enough confidence at least to try the place out. I'm very happy I made that decision. Shifu Hong and Yang Taichi instructor James Guidon are welcoming and patient, and the instruction appropriate to one's experience. But it is detailed and systematic, and nicely designed to build your practice step by step. You quickly understand that the instructors are also skilled and conscientious teachers as well as practitioners and that they really want to help you progress. The training goes on at many levels: from learning the outer forms; to learning the principles of alignment and coordination that underlie the forms; to the awareness of the sensations accompanying the physical movements; to the mental concentration that enables all of this. And the results slowly but surely become apparent: the strengthening of key muscles and the stabilization of joints; an improvement in balance and efficiency of movement; more physical and mental relaxation; and a deeper breathing that seems to permeate more of the body. And not to be overlooked: it becomes a lot of fun just to practice! I have much appreciation for this school and these teachers.

Since 2005, in my 60th year, Shifu Yijiao Hong's Taichi classes have inspired me to become a committed practitioner of this martial art. I began the study for the fun of it, with virtually no inkling of the profound effects that Taichi would have on me. Soon, I began to notice that I was calmer, and more "settled." Over the years, the subtle benefits of Taichi have accumulated, and I am dramatically stronger, more agile, and healthier than I ever imagined I would be at my age (knock wood -- I take no medications besides nutritional supplements). In addition, Taichi has helped me to develop more self-confidence and a heightened ability to focus my mind on whatever I'm doing.

I'm grateful to be a student of Shifu Yijiao Hong; she is a revered teacher; one who is widely known for her ability to help students develop deep awareness of the internal work of Taichi. I encourage anyone who enjoys movement, or wishes to, and who aims to enhance overall physical, emotional, and mental well-being, to explore the practice of Taichi.

CWTA LLC has three elements that make it a great place to study and practice. Most importantly, Shifu Hong is a wonderful combination of patience, knowledge and competence. Secondly, we have a great connection with Chen Grandmaster Chen Zhenglei who is an absolute treasure to the world Taichi community. Last but not least, the people who study here are really fun people who I am proud to have as friends.

I have been training in Yang Style Taichi for several years now. The instructor is very thorough and very patient in explaining the form and its application. YiJiao Hong leads us at a pace to allow for assimilating the new movements and their meaning. Taichi is something that can be improved continuously. The practitioner can always get better, more concentrated, more fluid, more relaxed and focused. The instructor helps by observing and correcting. She continually refers back to the basics and their application. Her goal is to help us understand so deeply that we can self-correct. Regular practice is the key to receive the benefits of Taichi. The Chinese Taichi and Wushu Academy is a great place to learn and to practice Taichi. It's something I believe I will be able to do for the rest of my life.

Yijiao Hong is an inspirational martial artist and a wonderful instructor. Her students can always rely on her commitment, dedication and thorough instruction. The school offers diverse styles and many unique experiences as well as opportunities to train with world renowned masters.

Taichi has really helped with the arthritis I have in my knees and my feet, and I think it has helped me keep moving much better than if I had never started it.

I wanted to learn Chen Style with one of its grand masters, Chen Zhenglei. Shifu Hong helped me begin learning the basic form in preparation for a seminar with Master Chen. Ever since that, I have benefitted greatly from Shifu and the teaching assistants. Shifu is good hearted and genuinely cares about her students' progress from week to week and year to year. She is constantly working on her own practice and very generous in sharing her own learning from Grand Master Chen with us.

It is fun to try to drop all my mental concerns and put my mind in my body to try to really feel the movements. Taichi has also helped over the years with knee pain from a long ago knee surgery.

I used to have Bad Asthma during my Early teen years . And have outgrown it over the years. However, as I've gotten older my asthma seems to have returned, especially when I catch a bad cold.

Taichi has been very helpful in maintenance and relieving the shortness of breathe that comes with asthma.

It is very fun to have my teacher who has experienced the positive impacts Taichi can have on one's happiness and health. I feel that my teacher really cares about me and my well-being and understands that practicing Taichi can be a way to bring an underlying sense of calm and equanimity into one's life. 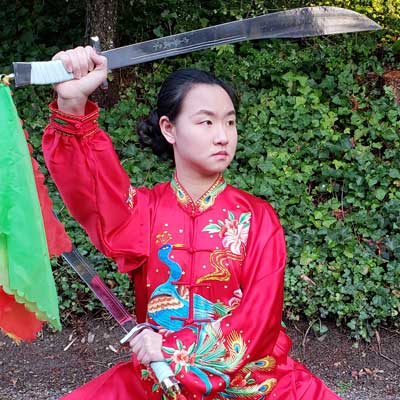 Master Instructor Assistant Yuxi Hong started Chinese wushu and taichi at the Chen Jin Lun Sports School when she was 7 years old in Hangzhou, China 2002. After moving to Seattle in 2013, Yuxi became a serious taichi student of Master Yijiao Hong. In 2019 she won Chen Taichi Old Frame One, Chen Taichi Short Apparatus, and Double Broadswords events at the US Traditional Taichi Team Trials, and become an US National Taichi Team Member. Yuxi is now a prominent member of our school's demo team. She has a Bachelor of Science degree in Mathematics from University of Washington in Seattle, WA. 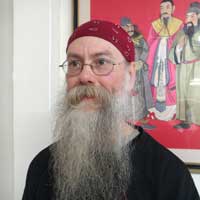 James Guidon is a graduate of the University of Washington with a Bachelors of Fine Arts Degree in Painting. He has been learning and practicing Internal Martial Arts since 1979. He has been teaching Yang Style Taichi since 1993; nineteen years with the Chinese Wushu and Taichi Academy. James is currently a student of Master Yijiao Hong and has been since 1997. James completed teacher training program in 2000 with Master Hong and is certified Yang Style Taichi instructor with over 20 years experience working with the Art of taichi to bring body and mind in Harmony and to experience the benefit of this practice - Health and Tranquility. 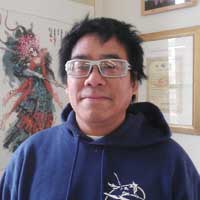 Larry Joined CWTA LLC in 2002, and was recommended to begin training in Chen Style Taichi by Master Yijiao Hong. At the same time he and his business partners started Titan Electric Co. here in Seattle. He credits much of the success of his company to his training in Chen Taichi: "The stress of this modern world's quick pace and never-ending demands need this traditional art to nourish the mind and body."

Larry has been on the CWTA LLC Demo team since 2007. He was promoted to Assistant Instructor in 2010. On May 31, 2016 Larry was accepted as an Official Disciple of Grandmaster Chen Zhenglei, 19th generation of the Chen Family and the 11th Generation direct line inheritor of the Chen Taichi System. In 2019, Larry earned the 5th level instructor certificate from Grandmaster Chen Zhenglei.

The Chinese Wushu and Taichi Academy's mission is to strive for longevity, better our quality of life — both in mind and body — and contribute to an understanding of Eastern culture. Master Yijiao Hong's teaching mission is to establish taichi practice as a habit for students.

The school year is divided into four semesters with 10 weeks in each semester. Class size is properly set to emphasize the key, which is individualized instruction. The classes are carefully divided by levels to help the student learn and advance with step-by-step instruction. At each academic level, the school emphasizes fundamental discipline, instructor professional standards, with inspiration and an encouraging teaching attitude. The school regulations are strict. The purpose for this is to refine student's excellence, promote moral and physical growth, and develop character.

Respect the art, parents, Shifu/Laoshi, seniors, self, and others.

Humble heart and manner to learn and practice, yet have confidence.

Be patient with yourself and teachers. Overcome the difficulties and challenges; a long enduring sense of purpose should be cultivated.